This year Naomi ran off to second grade and Asher schlepped off to Kindergarten. Naomi couldn't have been more excited. I think she lost sleep for at least two nights prior in anticipation. Asher, however, was really totally nonchalant about the whole thing. He didn't have questions, he wasn't excited, he didn't really want to talk about it. I guess part of that is a boy thing and part of that is an Asher thing.
But, whatever the attitude, the first day of school came! 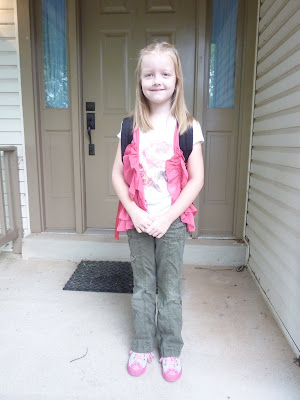 And Asher did get a little excited as he headed for the bus stop with Naomi. 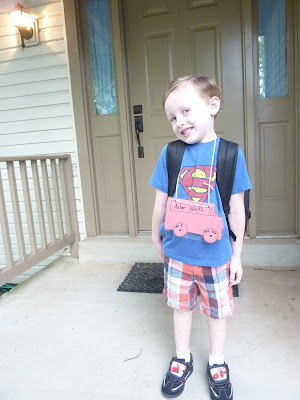 I felt so good about sending Asher off with Naomi to take care of him. What good kids they are. 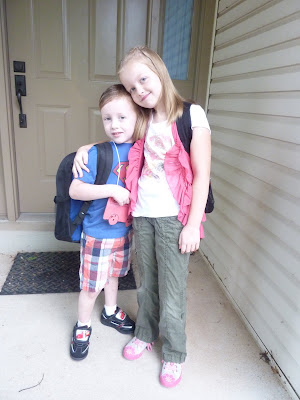 I was honestly a little nervous about what Asher would think of his first day. He pretty much hated his first days of Preschool. But he came back from Kindergarten happy. He has a neighborhood/church friend in his class and a couple of kids that he knows from Preschool. His only complaint was that they were so busy playing outside that they didn't have time for a snack. He hasn't said a word about actually learning anything, but I suppose he hasn't really learned much other than rules and schedule so far. His teacher is the same one Naomi had - Mrs. Butler. And Naomi has a young, cute woman named Ms. Kovacic who seems very involved in her teaching career. I think she'll be great. Naomi came back from her day with stories about all the times that she saw her best friend in the hall and the one time she saw Asher while he was at recess. I think she's thrilled to have the social aspects of school back.

So it was all a success. And my day went great, too. Our morning routine is shaping up nicely. I think this will be a great year!

Now is the time for New Year's Resolutions. January 1st is just a date. This is the time when our "year" really begins. Now is when we set our schedule - try to include exercise and scripture study and family prayer and night time teeth brushing and homework. Now is when new systems can be implemented and improved on. This is really the start of everything.

That's what I've been thinking about this past week. School starts on Monday and I want to have our schedule down smoothly from the first morning. Asher and Naomi will wake up, get dressed, do hair. Then everybody else will join us for family prayer, then we're going to try scripture study during breakfast - we'll see how that works out. Then it's collecting lunches and homework and brushing teeth and putting on shoes. Then it's off to the bus stop for the two elementary school kids. Then if it's a Preschool day, we'll have one hour to get Isaiah (and Mommy) ready. If it's not a Preschool day it'll be exercise THEN getting ready.

I resolve to make this year great!

Posted by Nancy Sabina at 11:52 AM No comments:

I've been meaning for a while now to blog about all the "baby steps" Sammy has been taking. When we arrived in Texas, he had 1 1/2 teeth. When we left he had 4. When we arrived, he sometimes took a step on accident. When we left, he sometimes walked 5 or 7 steps. He went from mostly all bottles for meals, to only 3 bottles a day. His hair grew in. He grew tons. His face changed from "baby" to "toddler". He now claps, sways to music, points, babbles, and says something that almost sounds like "mama". Here's a little video clip of his cute walk. It's really more of a run! He wants to go fast, and his hands are always up in the air like they are in the video. He's, in Isaiah's words, supedy dupedy cute.