So Many Reasons to Give Thanks

Samuel is, for the moment, safe in my belly.
Medical advances are helping to keep him there.
While he's there I'm able to be at home with my family.
Richard is working from home and able to help with the kids (and me) whenever needed.
The kids are growing closer and closer to their father, who they love so much.
So many people in our church are being so, so helpful.
Within 20 minutes of telling our Relief Society President about our situation, three weeks of babysitting had been lined up for my kids.
Dinners are now coming in twice a week.
All those dinners are coming from people who I have had the blessing to serve in their times of need. I feel that is a huge blessing - to have led a life (up til now) where I am able to serve others whenever needed.
A friend stopped by today just to clean up whatever little thing I needed her to do. I lay on the couch ordering her around like the worst kind of boss. And she felt blessed. And I felt awful, and so blessed at the same time.
Did I mention that baby Samuel is safely inside me still? Can there be any bigger blessing than being able to bring a wonderful little soul into this world?

So if you call me and ask how I'm doing, and I rattle off a list of complaints a mile long about my ears and hips hurting from laying so long, and how bored I am, and how sad Isaiah is that I can't play with him, etc, etc, etc, please know that I really am incredibly thankful to have those things to complain about. And then call me. Cuz I am BORED. And my hips hurt. ...
Posted by Nancy Sabina at 4:16 PM 4 comments:

I'm gonna get a little more detailed here than some (men) may be comfortable with. So stop now if you don't want to know...

Yesterday (Friday, May 14) at about 5pm I noticed that I was spotting (bleeding) a little bit. I blew it off. But I noticed again an hour later and again the next time I went to the bathroom. Finally, by 9pm I was no longer able to blow it off as a fluke and I started freaking out. First I called my Dr. to see what he would say. He told me that it was probably fine, but that I should come in to the hospital to have it checked out anyway. So I called my sister Ruth, who left an art gallery in Washington DC, abandoning the friend she had taken with her, and came straight over. In the meantime a good friend came over so that Richard and I could go straight to the hospital.

After checking several things and listening to the baby's heart beat (he's still a major wiggler and kept moving away from the heart rate monitor), two hours later they sent me home. While I feel relieved that there is nothing major...
~~~~~~~~~
I wrote the previous post last Saturday morning. I stood up from what I had typed above and passed out.
So then we knew, maybe there was something major and went straight back to the hospital. In the hospital they whisked me in to an ultrasound and discovered that my cervix was less than one centimeter thick, where normal would be 4cm. Upon this discovery they immediately put my head down and my feet up, letting gravity do its work. The hope was that taking the pressure off my cervix would help it thicken back up.
And so I stayed for five days, upside down, in the hospital. After 48 hours, they did another ultrasound and discovered that it was working--my cervix was thickening up and was already back to 3.5cm. So the plan from there was to do a little surgery that would basically tie my cervix closed and keep that baby inside longer.
On the Sunday after I checked in to the hospital, many family and friends were praying and fasting for us, and we felt the benefit of those prayers very much. We decided that this baby who we were praying so hard for needed a name. We had a couple of picks and after Richard and I separately thought it over and prayed about it during church hours, we decided this baby's name would be Samuel, after 1 Samuel 1:20, which says,

"she bare a son, and called his name Samuel, saying, Because I have asked him of the Lord."

Being in the hospital for that long upside-down was certainly difficult but I tried not to linger on the difficulty because it's a price I'm willing to pay to have our baby be in our family here on earth.

So Tuesday evening I had the surgery and there were some risks, but everything went wonderfully. And by Thursday afternoon I was allowed to go home.

I am now on complete bed rest, flat at home on my couch. It looks like I will be on bed rest the rest of this pregnancy which hopefully will be a very long time. We are working on hiring some kind of nanny/helper and are feeling very blessed that in the meantime Richard is working from home and so many friends are helping us out. Thanks for all the thoughts and prayers and calls. We really do feel the blessings pouring in. This situation has turned into the very best of the worst case scenario.

{Thanks to my sister Angela for being my scribe for this post. Typing is very difficult when you're laying flat.}
Posted by Nancy Sabina at 8:58 AM 5 comments:

This little guy in my tummy must really be growing right now. He's sucking the energy out of me so much I can hardly move. And I've gained nearly 2 pounds in the last 2 days (which I'm blaming on his growth spurt, not the chocolate cake).

... I've been sitting here trying to figure out how to lengthen this post, but really that's all I've got. That's it. Baby's growing. I'm tired. The End.
Posted by Nancy Sabina at 3:47 PM 3 comments:

He's 3. My baby is 3! (Good thing another baby is on the way!) We went really low key for Isaiah's birthday this year. We took the kids to a bounce house place in the afternoon and met one of Isaiah's friends there. Then after an hour of bouncing, we all went back to our house for an oh-so-deluxe meal of Mac N Cheese and Taquitos. With a leftover-Mother's-Day-chocolate-cake chaser. But a good time was had by all - and that's the truly important part. 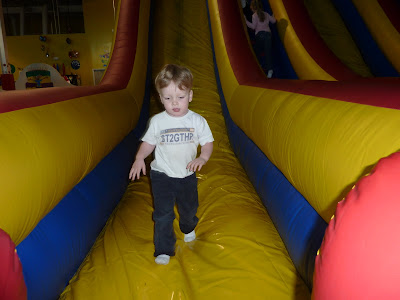 Isaiah said at the beginning of the day, "Asher NOT the birthday boy anymore. *I* the birthday boy!" (Really what he said was "Ah NOT be-dah bo an-mo. *I* be-dah bo!" But that's the real English translation.) Clearly he understood that this day was about him! 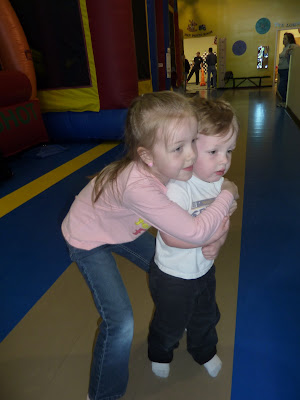 Isaiah loves the big slide at the bounce house place the most. 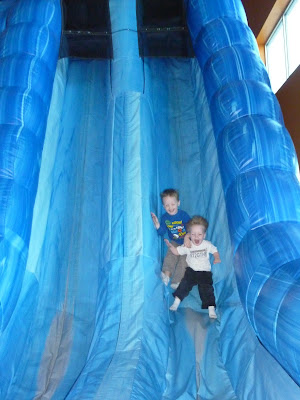 To make the leftover chocolate cake a little more special (and birthday-y) I put these sugar decorations on each slice. I thought it was totally lame, but the kids loved it. And that is some friggin' good chocolate cake, so nobody really cared what it looked like. 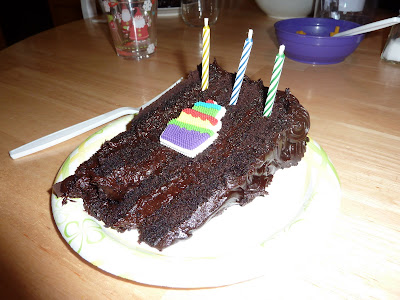 Presents were opened on the day of, but were mostly played with the next morning. Here Isaiah is enjoying his new "pu-pee" given to him by his Aunt Ruth. 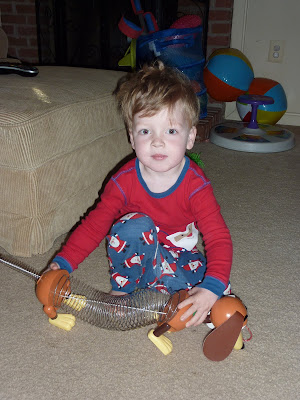 And here he is (a little later in the day) riding his new horsey from Mom and Dad. He yells, "Gi-duh" (Isaiah translation: Giddy-up) 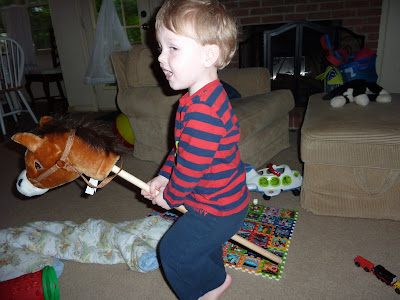 I surely do love that boy. He just so dang sweet. He has so much compassion and love of life. He reminds me of his Daddy in so many ways. 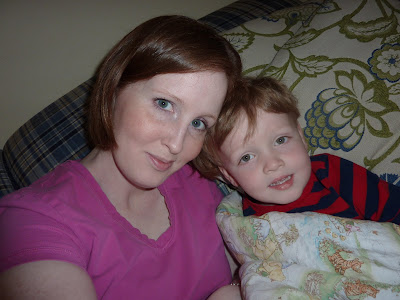 I see where people are coming from who say Mother's Day is a silly, commercialized holiday. But I also totally soak every bit of it up. Because there are plenty of thankless days in Motherhood. So why not honor the hard work of Mother's once in a while? And, yes, it's a little ironic that I want to be honored in my motherhood by having a day off motherhood. Yeah, yeah, yeah. I still want to relax.

Richard let me take some "time off" on Saturday to go get a haircut, do some shopping, and have lunch alone. While I was gone he and the kids bought me a lilac tree to plant in the yard! On Sunday Richard was super helpful and sweet to me. We went to dinner at his parent's house with Kevin and Kelly and Ruth. It was a lovely day.

I felt very honored and loved and appreciated. And that is the point.
Posted by Nancy Sabina at 11:33 AM 2 comments:

(This is a post-dated post. We all went to this event more than a month ago but the pictures never got posted so I thought I'd add them now. ... Seeing as I've got plenty of time these days...)

A nearby town once a year holds an event called "Big Truck Days". They get all their construction vehicles out, clean them up nicely, line them up in a parking lot, and let the kids climb all over them. For free! It's an awesome small-town event. And perfect for our truck-loving family! 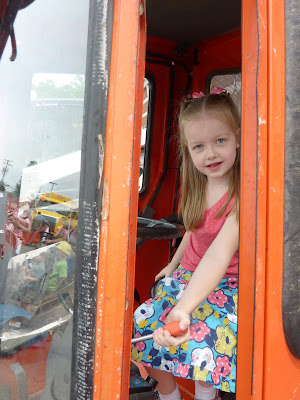 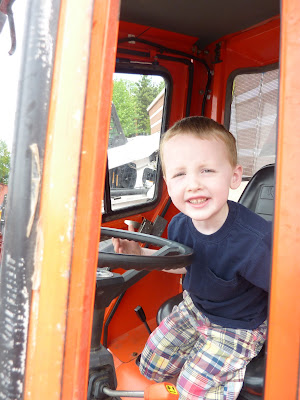 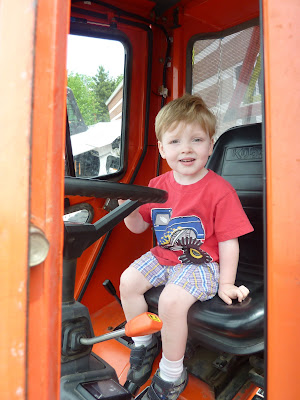 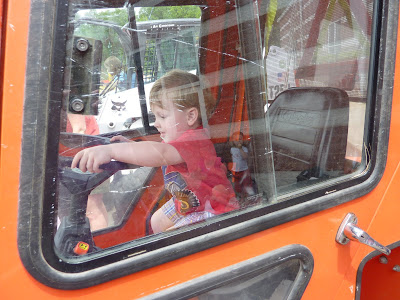 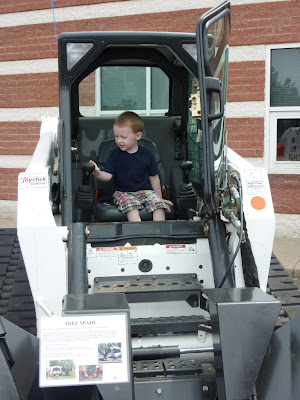 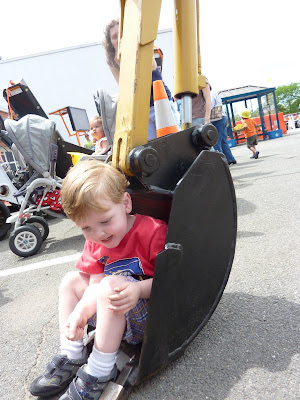 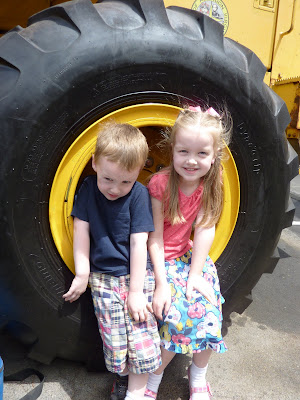 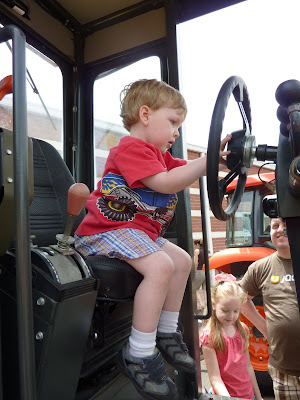 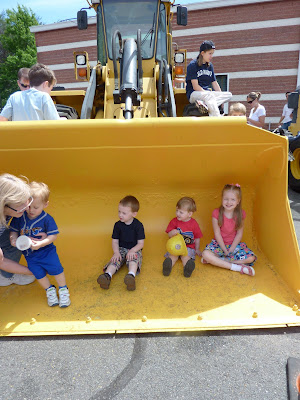 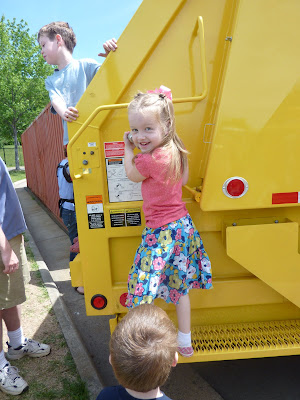 Pure kid heaven! Throw in some free cookies and punch and it was a perfect afternoon for the kids. (And one of the last things we did as a family before I was put on bed rest.)
Posted by Nancy Sabina at 9:39 AM No comments:

One At A Time

When I'm pregnant, I live in fear of being put on bed rest. Not because I would have to rely on others and who would take care of my children or any of the other usual worries. I fear it because I know that my wonderful friends would be over here in a heartbeat helping. And then they'd discover the ugly truth! Which is that while my front room always looks lovely, and my family room looks just as messy as anybody else's with three little kids, there are some scary parts of my house. Parts that don't get the regular cleaning that they should. Icky parts. Embarrassing parts. So while other mothers-to-be are nesting because of their maternal instincts by decorating a babies room or folding tiny clothes - I am cleaning the icky parts of my house.

Today's task: the laundry room. Piled with stuff and fluff. ... Not to mention the un-done laundry. 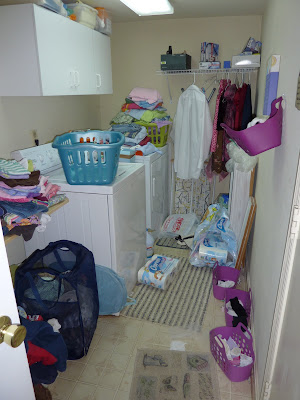 And here's the after. What? I never claimed this was about doing the laundry! This is about those piles on the dryer being gone and the floor being clean. Laundry to be done is to be expected. Dirty floors are not. 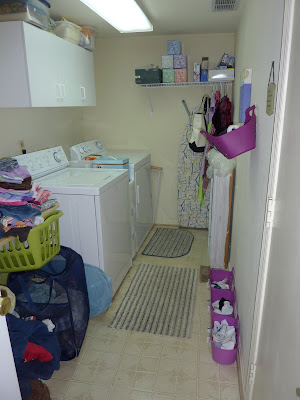 The pictures aren't really doing this justice. But take my word for it, the laundry room is now clean.
Next up: bathrooms. {insert theatrical "duh-duh-duuuuuhhhhhh!" here}
Posted by Nancy Sabina at 11:46 AM 4 comments:

Here's my belly at 20 weeks. Not that different than the 15 weeks shot. People still regularly remark that I don't look pregnant at all. But it doesn't bother me quite as much anymore since I've seen this baby and I know he's a normal size and healthy as can be. Why I'M not a normal size is still a mystery, but as long as the baby is healthy I can live with that. 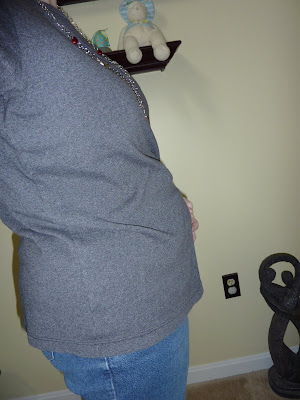 Pay no attention to those Easter decorations behind me. I swear I'm taking them down today. But they're so happy and sweet and they match my pretty yellow room so well!
Posted by Nancy Sabina at 3:20 PM 3 comments: