I joined in a neighborhood garage sale this weekend.  All by myself.  Richard was working so I managed the sale and four children simultaneously.  I'm pretty proud that I lived through it.
I made a little money, cleaned out a lot of clutter, and sold the big cordouroy chair and ottoman that no longer have a place here since we got the new couch and recliner (blog post coming soon about that!).
I'm glad I did it, but it reminded me how much I hate garage sales.  Some of the people who come seem to think that I'm giving this stuff away.  Which is just not true. I put a price tag on it for a reason!  No I will not sell you that lawn mower marked "$75" for $20!!!
But we did score this fooseball table from a neighbor for $5!  She asked for $3. 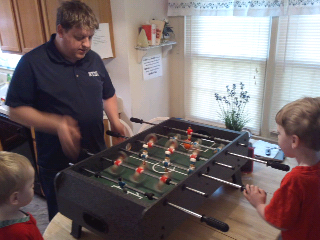 Posted by Nancy Sabina at 7:20 AM No comments:

We had such a fun Easter weekend. Richard's brother Bryan and family came into town which really upped the fun factor! The kids spent all day Saturday playing with cousins and Aunts and Uncles and Grandma and Grandpa. They did an egg hunt at Aunt Kelly's, they went to the Air & Space Museum, they ate dinner at Cafe Rio, then they played more at Grandma and Grandpa's. Sammy and I joined them around dinner time - we were waiting for furniture deliveries and letting Sammy nap through his bad cold. Sunday we all had a seriously yummy dinner at Kelly's again and had some more time to play and chat. It was all great!

The official Easter pictures were a little rushed (I think they always are!). There was an uncooperative toddler, and Isaiah decided he didn't want to wear a tie and threw a huge fit. But the good news is that Asher had enough style to spare and Naomi was as demure as ever. Plus Sammy somehow managed to look dapper while standing behind everybody in the middle of the flower bed. 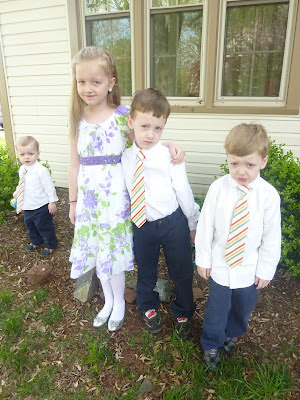 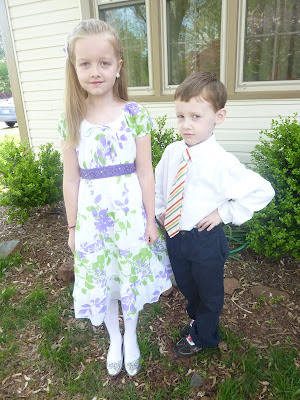 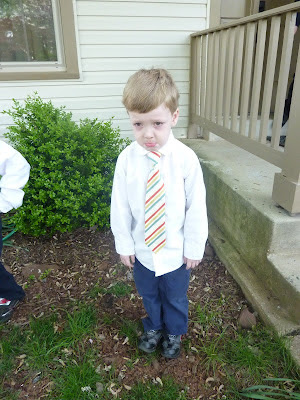 Adorable baby - even with a snotty nose and watery eyes. 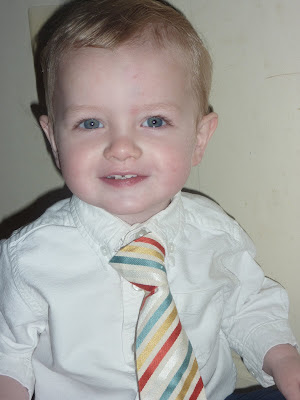 It was a great Easter and a great weekend after Spring Break!

Three years ago we bought a sofa at JCPenney. It was lovely. You've probably seen it in multiple pictures on this blog. It was blue plaid. It was cheery. It was not boring. I loved it.

But alas, the fabric was already worn completely through on the edges. Luckily, we bought the warranty. So getting a new sofa was as easy as going to JCPenney and choosing a new one.

Or so they said.

So we went to JCP on a Saturday - me, Richard, and all four of our crazy children. We chose a sofa that we thought maybe we could live with, but then changed our mind and got a leather recliner instead. Then we went to another store and, after much negotiating - between Richard and I about sofa's and between the children and I about their behavior staying decent for a few more minutes - chose a dark blue sofa. 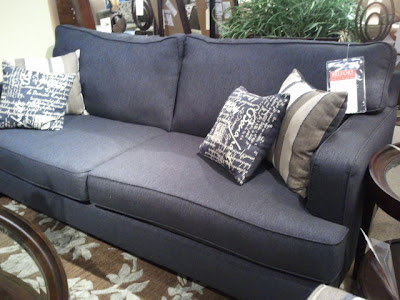 The next Saturday the recliner and sofa were delivered. Funny story - one store told me they'd deliver between 8 and 10 am. The other store told me they'd deliver between 12 and 2 pm. Then both trucks showed up at the same time - 11:15am. The recliner is fabulous. Richard is thrilled to have a leather recliner, it saves space in the room to have a recliner instead of an ottoman, and I don't hate it. The sofa, however, was a black hole in the family room. It was WAY too dark. I tried to like it, I really did. I thought maybe orange accents would help cheer it up. They didn't.
Seriously - look at that picture that I took in the store (above) and then compare it to this one (below). It looks so much darker in my family room. It looks practically black! 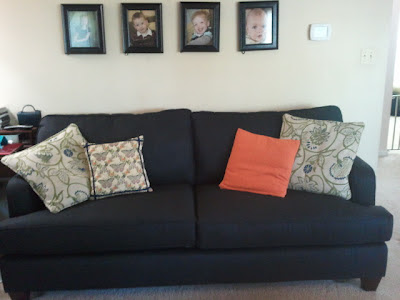 So back to the store I went. It took some patience and some repetition of my carefully planned flirty whining, but in the end they let me return the sofa for only a "restocking fee".

But then I still had to choose a NEW new sofa. *sigh* I finally chose a much lighter blue sofa that I thought would be great. But I was questioning myself so much, plus having that dark blue sofa that was technically not ours anymore sitting there a few feet away from our kitchen table, that it really was a stressful few days for me until it was delivered. 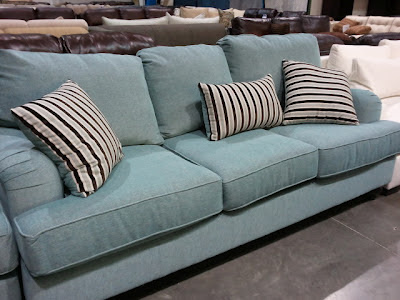 Fortunately, when the NEW new sofa arrived, I feel deeply in love (and deeply asleep on it's comfy, wide cushions!). I'm calling the color "aqua". I adore it. It's everything I wanted - cheery and bright and cozy and casual without looking dumpy. It just needed a few new pillows to un-generic-asize it a bit. I know orange is a trendy accent color right now - but that's the fun part about accents (homemade, cheap ones especially), I can afford to throw a little trend in! When orange is "so five minutes ago", I'll just make new ones! 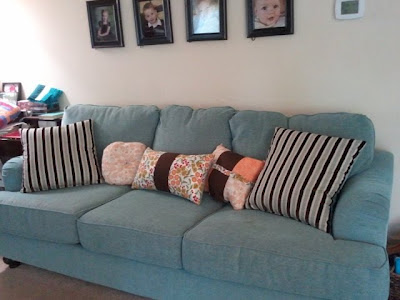 What to do with a mixed bag of candy and time to kill on Spring Break? Turn it into a science expirement! Let each kid test each one and give feedback.
Conclusion: nobody turns down candy around here. 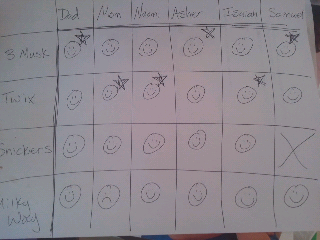 "Nooose" "Eyes" "Eeeears" while pointing at the appropriate facial part

"No clean! No clean! All done!" He hates it when we put all the toys away.

"Oofey" as he bumps his toosh down each step on the stairs.

"All done!" as I start changing his diaper or I put him in his crib.

... And a million other things that surprise me every day!
Posted by Nancy Sabina at 3:36 PM 1 comment:

Richard flew home Saturday at 11am and flew out again Sunday at 3pm. Does he have another family somewhere else? (Just kidding - actually he's working very hard and we appreciate that.)

The big kids watched an entire session of Conference. They did great! We put a cup of jelly beans on the mantel for each of them and told them the cups held 20 jelly beans right now and they'd get to eat them all after Conference. But that each time we had to pause Conference to deal with them or shush them or whatever, Mom or Dad would eat one of their jelly beans. Only 5 jelly beans were eaten by Mom and Dad during the entire 2 hours!

Our only-three-years-old blue plaid couch is falling apart. Luckily we have a warranty. So we got to go choose a new couch. We chose a new dark-blue couch and a leather recliner (to replace the chair and ottoman that we bought used six years ago). Next step, choose a paint color for the family room and kitchen! The front runner right now: a very light gray with blue tones.

Spring Break has begun! We don't have any going-away plans, but we do have plans for lots of fun little excursions. First off - swimming!
Posted by Nancy Sabina at 12:33 PM No comments: