It's Coming Up Fast!

We leave for our big Christmas festivities in 4 days! I spent last week doing things to get ready to get ready. That way this week I can just focus on getting ready. Ya know? The Christmas shopping is done. My calling is taken care of.
On Saturday was our ward Christmas party. The week before on Sunday they had passed around a sign up sheet and the teacher made a little guilt-inducing speech about how nobody had signed up yet and we needed to support our ward by doing our part. So when the sign-up sheet reached me and the talent show form was still blank I got a little brave. I didn't have any ideas but I signed our family up for a lip sync. Richard and I later decided on "I Want a Hippopotamus for Christmas". Richard wore a silly costume of a little girl (where his hands are her feet and her arms are doll arms attached to a bib-like-thingy that he wears) and did the lip syncing while the kids and I marched around in a circle with picket signs. We got great laughs and were declared "the funniest" by the Primary President. The kids did great. Isaiah only broke ranks once to steal ornaments off the tree on the stage and Asher broke ranks once to run to the edge and wave hi to his friend. But those "breaks in character" were only met with more laughs. Naomi took the whole thing very seriously and even sang along quietly to all the words as she marched. I didn't get any pictures of the actual performance unfortunately. The Primary Pres. did and if she sends them to me I'll pass them on to you later. But here are the signs. 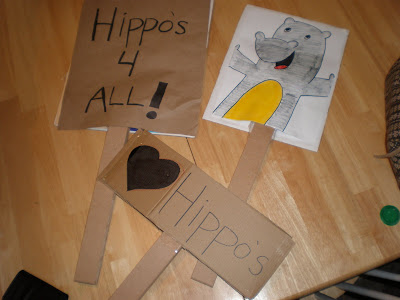 Naomi was even old enough to face Santa with no tears. She told him she wants an Ariel Barbie. But she's "not sure he heard her". 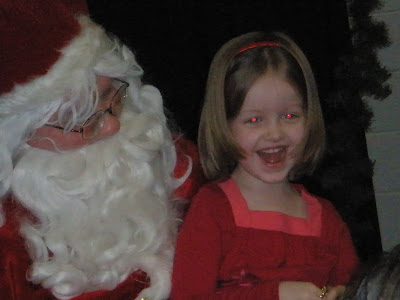 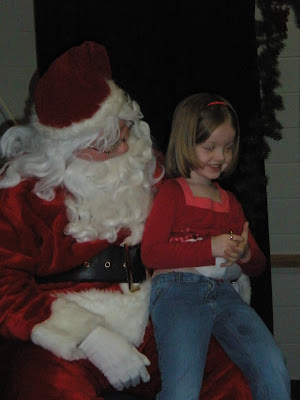 On Sunday we had friends over for dinner and just had a relaxing day.
On Monday, life kicked back in to full gear. This week I need to finish my Visiting Teaching (by having a luncheon at our house today for the remaining people), finish up a few Christmas packages, do all the laundry, plan the car's layout for maximum kid-happiness on our trip, pack, buy food for the trip... you know, just the essentials. I'll try to be better about blogging, but this is such a busy time!
Posted by Nancy Sabina at 8:03 AM

We are so going to miss you guys while you're away. And the singing was a HIT!!

I can't believe you leave in 4 days! I'm jealous!

I really wish I could have seen your performance--sounds like a real winner! You and Richard are so hilarious.