I recently watched an episode of some CSI show where the CSI's were lead to the killer by some spice on the floor of the kitchen. And I gotta think...what conclusion would a scientist come to if he examined my kitchen floor on any given day? I think it would go something like this:

"I found a powdery substance under the first chair that I determined to be sugar. I traced it back to Cinnamon Toast Crunch. Clearly, someone ate some cereal for breakfast this morning! But I also found trace amounts of a day-glow-orange substance that, upon further testing, I determined to be reside from Macaroni and Cheese. And, upon breaking down the chemical compound further I determined never to eat that stuff again. These two pieces of evidence tell me that nobody swept the floor after dinner last night. But where it gets really confusing is that under a second chair I found trace amounts of peanut butter and a small amount of jelly. It was in an odd shape so I put it into the computer and determined that a piece of bread with PB&J had been dropped on the floor there, PB&J side down. I have no way of knowing how old this specimen was, but I think we can safely say that this floor has not been moped in a while. One last thing, at least 7 toys were in the vicinity of the kitchen floor in question. I found trace amounts of human saliva, sugar, soil, and peanut butter on each toy but in varying combinations. In conclusion, this family used their kitchen regularly." 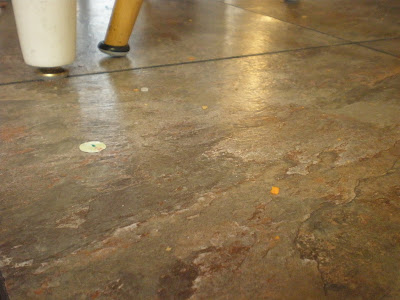 Ya know? (And that's on a good day! I look at that picture and remember that I swept up a little disaster this morning, which explains why it's so clean.)
Posted by Nancy Sabina at 11:05 AM

I totally agree! They find a little hair on a perfectly clean floor. My house contains every imaginable type of human substance. They really should do a show in a family kitchen where they have to sort through hair from the neighbor's dog and a leaf from the tree the kids pass on the way to school, and bug bits, and peanut butter on everything...

Hahaha :) Nancy you are awesome :)